Premiere in Karlsruhe "The Clock is ticking"

THE CHOIR AS A DOUBLE BRIDGE 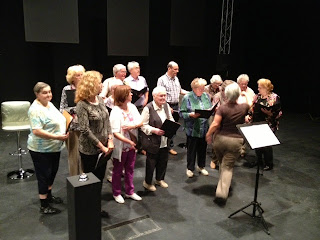 The choir of Banat Suebians from Karlsruhe consists of women and men who all have emigrated from Romania to the Karlsruhe area in the past 30 years. All of them are retired and full of memories about their old home and their new. Here they rehearse with choir leader Hannelore Slavik the traditional Banat song: "We will not meet again as young as today. So let us sit down and sing the old songs..."

GETTING READY FOR 9 ROLES IN 60 MINUTES 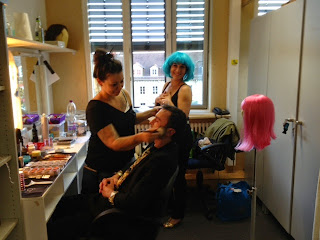 Romanian actors Sabina Bijan and Colin Buzoianu get their basic makeup.
They have to be prepared to play a maximum of 5 out of 9 roles. Peca Stefan has conceived a play with 9 scenes from which the audience chooses 5 each night.
The costume and wig changes have to happen quickly because "the clock is ticking". 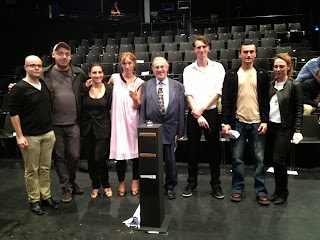 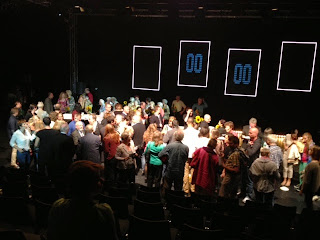 Cast choir and audience celebrate on stage the first performance of DIE UHR TICKT in Karlsruhe. After each performance the audience is asked on stage for a glass of sparkling wine and a piece of cake to celebrate the performance they have contributed to by voting which scene should be played next.

AN IMPORTANT NEXT STEP FOR THE RELATIONSHIP OF TWO PARTNER CITIES 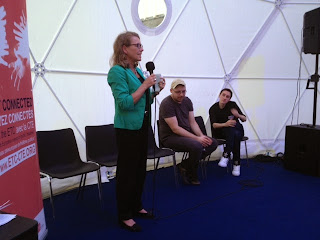 In her speech before the opening night, Dr. Susanne Asche, Head of the cultural department of the city of Karlsruhe, underlined the importance of artistic projects in the process of keeping the friendship between the two cities alive. On the seats: Playwright Peca Stefan and dramaturg Michael Gmaj.