How do we decide to get older together?

To address age and ageing is not the most simple research topic. Beyond statistics and theories, age is extremely subjective. A lot of questions came to mind. A demographic decline in Europe set against an unprecedented population growth worldwide. Questions about the age(ing) of humanity itself. Prolongation of Life. The progress of science, technology and health versus the consumption of natural resources and environmental change. Religion versus education. Migration. Decline and progress. Diversity. The politics of dealing with ageing populations. Economic shifts and current economic reality. Responsibility. Intergenerational relations. Inheritance. But what about inner ageing? Self-awareness. Self-projection. Social memory versus personal memory. What is the psychology of it all? And what is the timing of it, at a moment when it seems – more than ever – that we’re on some sort of timer to resolve many of these matters, in order to guarantee the survival of humankind itself. Where are we on the clock, as the clock is ticking?

All of these aspects and questions had to be taken into consideration while designing a research questionnaire in the cities of Timișoara (Romania) and Karlsruhe (Germany). But there was another statement that I felt to be essential for the research, the simple reality: we start ageing as soon as we are born. Beyond all the data, the way people perceive their own age, remember previous ages and project ages to come was of extreme interest to me. Ageing is a process that never stops, and it’s extremely interesting to compare how people age in two EU countries which are at the two opposite ends of the spectrum: the economic champion Germany, one of the fundamental European cultures and Romania, a country still recovering from its communist past, where traces of the Middle Ages can still be found in the every day of its rural communities.

Of course, the findings showed many differences, but also striking similarities. For instance, the way young people relate to ageing is extremely similar in both Timișoara and Karlsruhe. For the generation 60+, which dealt with two different political realities while growing up, the differences are striking upon visual contact: Germans generally look younger, Romanians physically degrade faster. And it doesn’t stop there. There is a lot to be said here about the similar histories East Germany and Romania have, and a very interesting comparison between the forms of communism in the Eastern bloc and their traces in today’s society. Even if Karlsruhe was not part of the Eastern bloc, accounts and stories of residents originally from East Germany drew a poignant picture addressing this topic. What are the current urgencies of these demographics? Which are the clocks? And how are they ticking?

At the end of the research period there was enough material for five plays, not just one. On top of it all, there was my everlasting fascination with time and my own philosophy about how I am getting older. But it wasn’t just me. The subjectivity of ageing and its perception remained at the core of all the findings. It seemed extremely relevant and exciting to me to create a concept that would address one question: how do we decide to get older together? What if we only had a finite performance time, and a social situation (theatrical convention) that urges us to make a decision? So quite literally, the clock would tick. What happens when we know we only have 60 minutes? How do we decide to spend that time? What if we are aware we’re getting older with each second? And what if we know the performance is never the same, just as our own lives are never the same? What if we would only get to experience this night with the others who have come here, knowing that no other audience will experience exactly the same thing? What if the hour we get to experience is the consequence of another audience being here before us (an inheritance)? And what do we leave to the next audience? In other words, what is the responsibility of our passing, and being in a moment – even as an audience in a theatrical event?

Even further, what if an audience in Karlsruhe would inherit a performance from an audience in Timișoara? How would that play out? And so on... One of the initial thoughts that excited me the most about this performance which inherits itself was this idea: that the performance would create its’ own memory, its’ own history. I would just imagine how it is to discover, as an audience member, accounts of a performance that I haven’t seen and to experience a trace (the continuation of a scene started in the previous performance), an inheritance from these strangers, who might be from a different country altogether. And what great joy I would have to know I will leave something to the next, unknown person.

In a discussion with director Malte C. Lachmann, we did some “riffin’” (or maieutic) and reached this impossible title +/- 60 which is... economically disastrous because it can’t be issued on tickets (given the complicated +/- symbol). But even so, I just loved the title and its simplicity. I believe that in conjunction with our “official” title The Clock Is Ticking it makes a lot of sense for the performance. Not only because it spells out “more or less 60 minutes” but also because it implies our range of research, while inviting all ages to take part in this theatrical construct.

I think the stories inside the performance are worth the trip to the theatre, since they are addressing many of the topics above, but what will really make this piece click will be the story audiences write themselves, together, and how they will decide to age for those 60 minutes. To me that is the most exciting part of theatre.

Looking older than you are?

The actors from Karlsruhe and Timisoara now.... 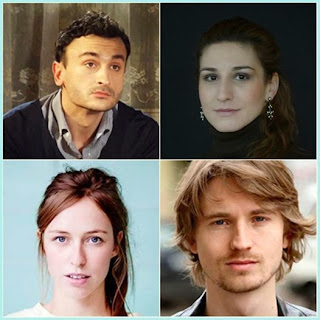 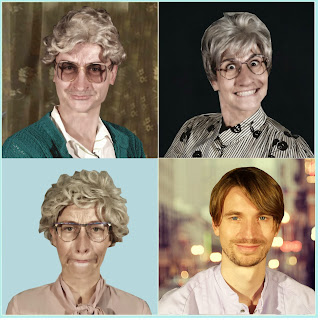 Malte C. Lachmann, director of the play "The Clock is ticking"

"Although we have finished our first three weeks of rehearsals in Karlsruhe and the theatre is on holidays now, the creative team's work doesn't come to a halt: We are busy preparing our rehearsals in Timisoara as there will only be two weeks left to put together the interactive theatre performance we started to create in Karlsruhe. And there is still a lot to do: Our playwright Peca Stefan has written more than three times the material it would normally need to put together a conventional theatre night as we will have the audience choose the scenes they want to see. That means a) each show will be unique and b) there are lots and lots of scenes for us to rehearse in order to have enough of them in stock. THE CLOCK IS TICKING and quite literally so.
So, finally, after three weeks we have managed to have a draft version of each of the scenes. The work itself was full of discovering the little and big differences between two theatre cultures (German and Romanian) during rehearsals and also whilst having a beer afterwards. Though, of course, there was not too much time to focus on that with all the scenes being rehearsed, rewritten and translated at the same time – a real inter-European creative chaos you might say. We are all thrilled to see where rehearsals will lead us as soon as we arrive in Timisoara and what it will be like to play with the reactions of a Romanian audience.

Now, without the rehearsals, there is more time to discover other meanings of the “Art of Ageing”, for example the art of ageing portraits of our actors on photoshop that will be projected throughout the show:"
Publié par European Theatre Convention (ETC) à 8/14/2014 No comments: 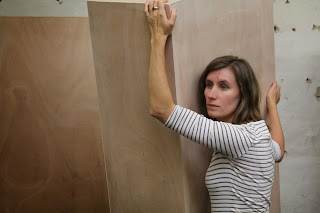 I`m Julia, the director of STRAWBERRY ORPHANS and I also did the research with my colleague Silke in Romania.


We just started the practical work in Braunschweig (Germany) with lots of improvisations and first scenic steps. One main challenge was the way to a common language on stage, which is now a mixture of Romanian, German and English. It is quite amazing to see that this is working.


For me, the most fascinating point of this project is the international exchange in aesthetics and intellectual approaches. Especially the hard discussions we had about justice, guilt and racism opened my mind. It should have been obvious, but the fact that we are people from one of the poorest and one of the richest countries in the EU really means connecting very different perspectives on the chances and risks of this whole European Union. For now it really feels like a very good chance to reflect on my own positions and doubt things I felt really sure about.
Publié par European Theatre Convention (ETC) à 8/11/2014 No comments: