What kind of stage director are you?

10:00 o’clock. Pia Dederichs, costume designer, still isn’t here.
2 Minutes later she arrives.
Too late.
It’s the third time Pia is late, which means she has to cook for the whole team.
This is just one of Miriam Horwitz’s rules.

Then Miriam starts the daily warm-up.
30 minutes of fitness, stretching and poweryoga.
That’s one of her other rules.

She loves discipline, hard work, physical strength and health.
This means that she demands a lot from her actors.
But not only in a physical sense, also intellectually...
A lot of time is allocated during the rehearsals for talking.
About current themes, politics, and society, mostly referring and connected to the project of course. Even the actors give special presentations about chosen topics.

Although her way of leading is quite strict, she really wants to create a team around her.
Everybody’s opinion, suggestion or advice is welcome.
She is really interested in everyone's impressions during rehearsals, even from the young students or interns (I have not seen any other director who includes everyone from the artistic team, no matter which position they have).
She creates a very familial atmosphere. It is not just some people working together for a few weeks; working with Miriam Horwitz means spending a period of your lifetime together. And it can be really fun. Her energy is impressive and contagious. She herself is a performer during the rehearsals from time to time, playing the king, the teacher, the mother or just being crazy.

She wants artistic freedom, meaning time and liberty for the process, for creating, finding, forming, trying, failing, and building a team, which is 100% dedicated to the project, working towards an aim, which is never 100 % definite.
This way of working is not always easy when putting it in the context of a city theatre, with its hierarchical structure, its bureaucratic system and the lack of time.

It’s like the dramaturge Bernd Stegemann says:
“The director’s force crystallizes in the ability to turn the genuine character of the text, with his chosen propositions and together with the actors, to a new quality.
The greater this force is, the more successful the performance can get, or the more disastrous its failure“.
This is the risk more directors should take.
Miriam does.

After all Miriam's work is essentially about finding a new language on stage.
And it is not just the actors, the lighting technician or even me that have to learn it.
It’s important for the audience to understand her intention and to grasp a feeling for her artistic cosmos, because and especially this time, from the very first show of „Ich befürchte, jetzt wir kennen uns“ we will be on our own conducting it, having no cues, no scenic lighting – we will decide which light and when. We are free to make our own decisions.  So are the actors. We have built a framework in which we can move.
Our strength is in our intuition and the trust we have in each other. 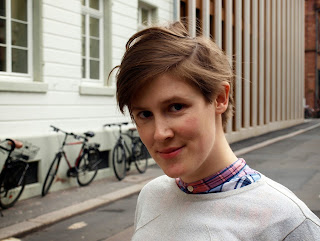