The cultural exchange has been successful – artistic team got big applause!
An audience survey by Janina Beck, Intern at Theater und Orchester Heidelberg.


While the first spectators are entering the theatre, taking off their soaked jackets and give them to the cloakroom attendant I try to figure out their previous knowledge and expectations of „Ich befürchte, jetzt kennen wir uns“. I am interested in what they think about such projects in line with the ongoing globalisation of the world.

Anna Maria L. from Heidelberg replies: “Such projects are more than important! They are a chance to get to know theatre esthetics from different countries and to gain new perspectives.“

Sophia R. from Rauenberg agrees: ”I’m interested in the cultural exchange. I hope that contemporary drama brings more young people with different cultural background together and notably to go to the theatre. I hope we, as the audience, will notice this exchange.“

The venue is wrapped in a spooky dark light with generated fog and the public is sitting dangerously close to the action. It’s so quiet you could hear a pin drop.

Dieter B. from Heidelberg: “The stage design is very impressive. The audience is sitting vis-à-vis, that’s new for me. It’s like the searching and penetrating looks from the actors interfuse me.“

Annette P. from Heidelberg likes the stage very much: “It’s unique that it’s rotatable and formed like a walkable ramp! I like the timber and the details very much.“ 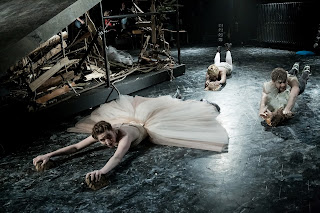 My first thought after the actors enter the stage is about their wondrous suits. It’s a mixture of fabulous and abstract designs.

So much for the first impressions…

First the actors stand next to each other and move slowly and controlled but little by little they get more hectic and ecstatic.

The audience is impressed by the extraordinary way of movement and the imbrication of several theatrical methods.

Marlene P.-S. from Trier agrees: “This interlinking is new for me, but exciting!“

“A successful combination, the movements have extended the language.“ (Peter Z., Frankfurt)

Erika M. from Heidelberg contradicts: “I can’t understand the physical activity referring to the subject. Everything is like a bit too flurry, too loud and too disturbing.“

“The first spoken sentence hits! It shook me up, while before I was totally captured by and immersed in the movement.” (Alexander W. from Heidelberg)

This first sentence of the play sets the course for the play: As Ivana leaves Filip it turns out that he can’t remember special moments, for example like their first love confession. Furthermore he’s also not ready to recapture this memory.

It is very interesting how the public thinks about narrated time and narration time:

“I think there are some time jumps. I also believe that this story can happen anywhere, whether the people are young or old.“ (Erika M., Heidelberg)

Marlene P.-S. from Trier describes it by a single word: “Timeless!“

I also want to know which actor the audience likes the most - But they couldn't agree:

“Lisa Förster has the attitude of a ballerina.“ / “She shows so much strengths but looks really gracile.“ / “Ivana has an excellent pronunciation.“

“I was so surprised about the big voice of the petite actress Josepha Grünberg.“ / “She has a lot of humor and knows how to entertain.“

“I’m impressed by Fabian Oehl’s strength and his body control.“

“I think Andreas Seifert’s skill is based on his experience.“ (Stephan, Frankfurt) 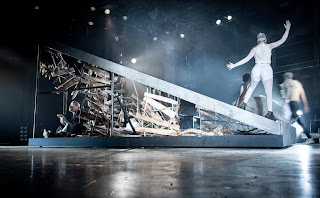 Another question from the survey was: “Which scenes did you particularly like or dislike?“

"I like a lot the quiet moments. In these scenes it’s easier for me to understand the narration“. (Anna-Maria L., Heidelberg)

“I didn’t see the memories that this play was about." (Erika M., Heidelberg)

“The emotional song by Ivana was really cool. Was it “Lithium” by Nirvana?!" (Alexander W., Heidelberg)

“I didn’t like the physical violence.“ ( Susanne M., Heidelberg)

“I’m glad that no one had been injured!” (Peter Z., Frankfurt)

21h15: A big applause for the actors and the team around Miriam Horwitz!

21h30: While the public compliments the actors and the team, I’m handing out my questionnaire and interview some audience members.

During my research I thought about the topic and the difficulty of the project, and that’s what I want to know now from the audience, too: Has the production inspired you to think about something?“ / Are there unresolved questions?

“I have been thinking about what it means to be an actor.“ (Barbara K., Frankfurt)

“I cogitated about nihilism and war.“ (Marlene P.-S., Trier)

“I asked myself all the time if someone would die.“ (Alexander W., Heidelberg)

I talked with some ladies about maturing and how they define it, according to the motto of the project “The Art of Age!ng”: 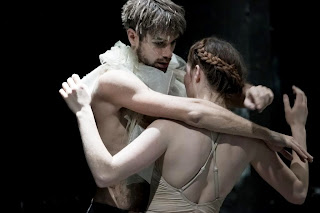 To give a résumé

The audience liked the high skilled actors, the special design of the stage and the richness of details. The experimental use of phisicality detached from direct meaning of the spoken wod presented a challenge to the viewer.

The rehearsals of the Croatian production will start next week in Zagreb. The audience from Heidelberg is already cuirous to see the result and wishes the Croatian team and Miriam Horwitz

A few words about me

A few weeks ago, my ntership tutor explained to me what to do, I remembered she said:
“Acquaint yourself with the production, work into it, it’s important to know what the audience is thinking“. At that point we wanted to figure out how my voluntary project would look like. Realizing a project is the task of each volunteer of the „Landesvereinigung kultureller Jugendbildung Baden-Württemberg“ so I, Janina Beck, a 19-year-old girl from a small town, 30 kilometer away from Heidelberg, working one year at press department, decided to do a survey with the audience of the opening night.

To prepare this survey, I attended the rehearsals and the press conference just a week ago.

It was the first time for me to visit a rehearsal without audience, where only the team is present, and I was amazed by the atmosphere which was magical but also very professionnal. Right after that, I started to work on the topic and made this questionnaire, printed 100 copies and built a carboard box to receive the survey on the opening night.
Publié par European Theatre Convention (ETC) à 11/19/2014