Interview with Nino Haratischwili
In Bratislava, rehearsals for LAND DER ERSTEN DINGE / Bludičky, the co-production of Deutsches Theater Berlin and the National Theatre Bratislava have begun. Shortly before her journey home to Hamburg playwright Nino Haratischwili describes the first three days of rehearsals: 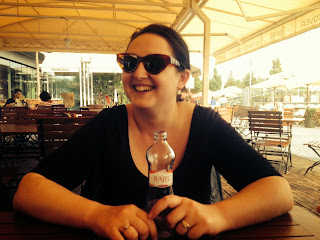 “I think it is impressive how quickly the involved parties from the two theatres have come together and that after just a few days of rehearsals we have already become a team, in spite of the many communication and translation problems. The coming together and the growing mutual awareness of the two groups from different countries, their cultures, their temperaments and their modes of expression is inspiring for everyone and can be used as a major source of creativity. I am excited to know that we have four brilliant actors and a young production team who will, in the coming weeks, make my play into their own story”.

From now on rehearsals will continue without you. How does that make you feel?

“It is sad but I feel that it is also right. At this stage of the process I, as the author, am no longer needed even though I would have loved to continue working on it. But I am looking forward to attending further rehearsals in Berlin and the premiere on 14th November”.

What aspect of this project posed the biggest difficulty for you?

“The biggest difficulty was also the biggest challenge. When you are commissioned as an author, you are usually in contact with a dramaturge, maybe even a stage or theatre director who supports you in working on ideas and first drafts.  But for LAND DER ERSTEN DINGE I was in contact with two theatres, four dramaturges and very different ways of communicating and different historical backgrounds. Owing to the distance (I live in Hamburg) as well as the language barriers we had to find a common level of communication. This was, ultimately, very productive and an important learning process for me but it also gave me a few grey hairs which brings us back to “The Art of Ageing”. (Laughs)

How did you feel about the topic “The Art of Ageing”? Was it inspiring or limiting?

“At first I was a little intimidated by the topic because it so easily takes on a negative connotation if it is not approached openly enough. But the topic is extremely important to modern society and so I also wanted to accept the challenge of dealing with it. Especially, since the topic has a different kind of relevance in the two countries for which I wrote the play. Questions of the future and ageing also concern us younger generations”.

The main focus of the play are two older women, one from West Germany who is confined to her bed after being ill, the other one from Slovakia, who nurses her. They cannot avoid engaging and dealing with each other. A hopeless situation?

For the two women the situation certainly seems to offer little hope and no way out. But they have no other option than getting to know each other and, over the course of the play, come to value each other’s life stories, quirks, sense of humour and problems.  The fact that we have two actors from Bratislava who speak both German and Slovakian was a huge asset. This made it possible for me to incorporate their linguistic abilities into the play from an early stage”.

And finally: What is the art of ageing for you?

“I believe it means not to isolate yourself, not to live in the past and to stay inquisitive. But this is not the sole responsibility of the ageing individual but also of society which, in times of youth obsession and superficiality, makes the topic of “living in old age” a taboo. That needs to be changed”.